Update: In January 2016, the CHILD Study video was awarded first place in this competition. 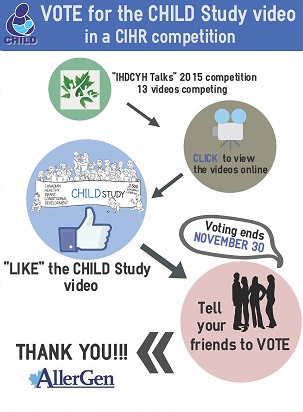 The CHILD Study whiteboard video is one of 13 entrants in the 2015 CIHR-“IHDCYH Talks” Video Competition.

For the entire month of November, 2015, the general public can access, view and “vote” on the videos by clicking the thumbs up (“like”) button. Online public voting accounts for 10% of each video’s overall score. Winners will be announced in early 2016.

To vote for the CHILD video and to watch all of the submissions to this competition, please visit the IHDCYH Talks Video Competition YouTube Channel.