New research from the CHILD Cohort Study sheds light on the link between a woman’s psychological wellbeing during pregnancy and the immune health of her newborn.

Published in Clinical Experimental Allergy and featured on the journal’s cover, the research found that when mothers experienced depression in the third trimester of pregnancy, their infants were twice as likely to have reduced levels of a critical immune antibody. The antibody—secretory immunoglobulin A (sIgA)⁠—is thought to help an infant’s developing immune system distinguish between harmful and harmless substances in the gut.

“To our knowledge, ours is the first human study to show an association between the timing of a mother’s depression during pregnancy and a lowered gut immunity in her infant,” said senior researcher Dr. Anita Kozyrskyj (University of Alberta). 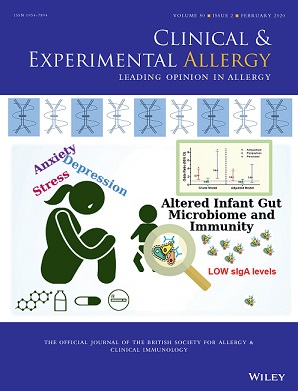 “Our findings suggest that there is a ‘critical window’ when a mom’s mental health can have a significant impact on the development of her infant’s gut microbiome and immune health,” she added.

Although sIgA is also passed from moms to infants through breastmilk, the researchers found that breastfeeding did not change the relationship between maternal distress and lower sIgA levels in infants.

“We also found that the lowest levels of sIgA occurred when infants were between four and eight months of age, the time they are starting to produce greater amounts of their own sIgA,” added the study’s first author, medical student Liane Kang (University of Alberta).

The researchers followed 1,043 newborn babies participating in the CHILD Cohort Study, building on their previous study that showed a general association between a mother’s prenatal and postnatal distress and her child’s sIgA levels.