When is the best time to introduce peanuts? 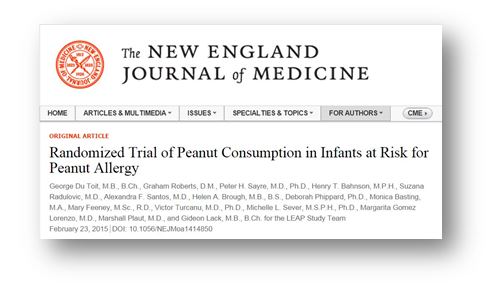 A new UK study involving more than 600 babies shows that consumption of peanuts in the first year of life can prevent the development of peanut allergy in high-risk infants.

The study, Randomized Trial of Peanut Consumption in Infants at Risk for Peanut Allergy, found that infants (between 4−11 months) who consumed at least 6 grams of peanut per week were significantly less likely to develop an allergy by 5 years of age, compared to infants who avoided peanut entirely.

The study was published in The New England Journal of Medicine and the findings were presented February 23, 2015, at the annual meeting of the American Academy of Allergy, Asthma and Immunology.

AllerGen researchers and pediatric allergists comment on the significance of the study and the importance of its findings for Canadian families: