“You’re Totally on Your Own”: Experiences of Food Allergy on a Canadian University Campus 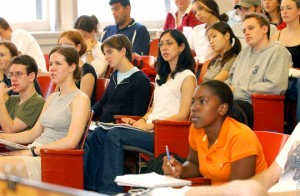 Following the September 2015 death of a first-year Canadian university student from an anaphylactic reaction, new research explores the experiences and perceptions of food allergic undergraduate students.

AllerGen Researcher Leader Dr. Susan Elliott and fourth-year student Alexandra Olarnyk, both at the University of Waterloo, conducted the research, which was published in the Universal Journal of Public Health in January 2016.

Using focus groups, the researchers found that many food-allergic students at the University of Waterloo experience a difficult transition into university, and that social isolation occurs as a result of their food allergy, causing them to engage in risk-taking behaviour.

“Twenty-five percent of the participants in our study suffered an allergic reaction on campus,” says Olarnyk. “The majority of those reactions occurred in the first month of student life and were triggered by food from a residence dining hall.”

Over a third of the study participants described university events or lecture halls that lacked consideration for students with food allergies, causing them to feel isolated and left out, the authors noted. “In some cases, that feeling of isolation led to risk-taking behaviour, such as ingesting small amounts of a known allergen or enduring symptoms of an allergic reaction without taking medication,” Olarnyk adds.

“Like most Canadian universities and colleges, the University of Waterloo has no formal policy addressing food allergies,” says Dr. Elliott. “This sets the stage for serious policy implications, and is of concern because the combination of increased vulnerability and higher likelihood of risk-taking behaviours may put university students at an even greater risk for an allergic reaction.”